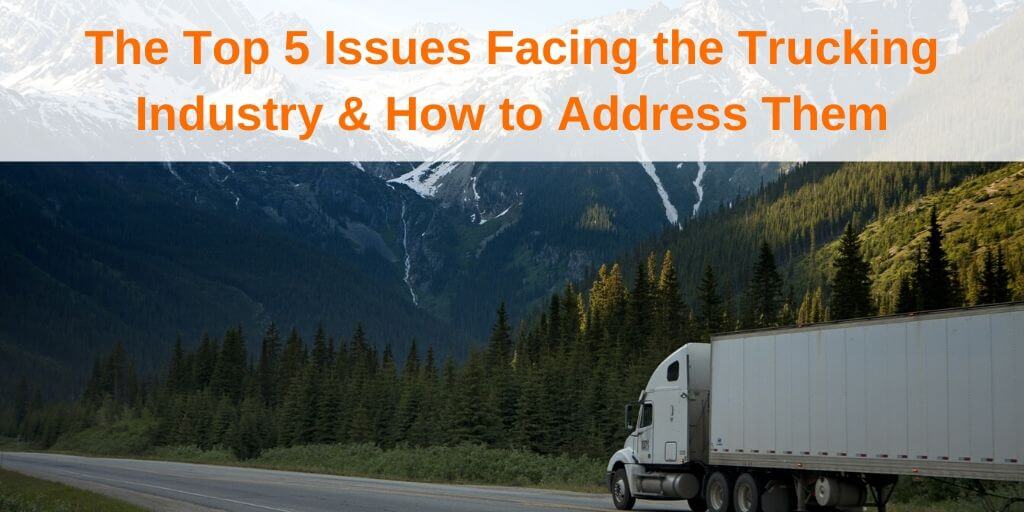 The trucking industry is rapidly changing, and with that comes numerous issues of varying severity.

The American Transportation Research Industry (ATRI) surveyed over 2,000 trucking industry stakeholders to gauge what they view as the top issues facing the trucking industry and what strategies they believe would be the best to address them.

Read on to learn what the trucking industry views as the top five issues and how best to solve them.

The driver shortage came in as the industry’s top concern for the third year in a row for the ATRI survey. According to the American Trucking Association (ATA), the trucking industry was short more than 60,000 drivers to meet demand in 2018.

The struggle to recruit and retain qualified drivers is at the heart of this issue. The ATA estimates that if conditions don’t change substantially, the industry could be short more than 100,000 drivers in just five years, and 160,000 drivers by 2028.

Strategies to Combat This Issue

1. Develop an apprenticeship program aimed at attracting, training, and retaining 18-20-year-old drivers to the industry. The trucking industry is mainly composed of older drivers that will inevitably retire in the coming years, further adding to the shortage. If younger drivers are able to be attracted to the industry, that will bolster the driver pool available.

2. Expand driver recruitment of women and minorities. According to the latest data from the U.S. Department of Labor, the truck driver population is comprised of 6.6 percent females and 40.4 percent minorities. Expanding both of these populations is potentially a great way to combat the driver shortage, as well as allowing women and minorities to be more represented within the industry.

For the ninth consecutive year of the ATRI survey, the HOS rules are in the top-three industry issues. In August of 2018, FMSCA asked for comments on the HOS rules with emphasis on the 30-minute rest break and the split-sleeper berth provision.

Now this year, they are proposing changes to the HOS rules based on those comments and the research they have performed. The proposed rule adds flexibility to the sleeper birth provision that would allow drivers to “split their off-duty time into an 8 and 2-hour, or 7 and 3-hour split, with neither period counting against the 14-hour driving window.”

Strategies to Combat This Issue

Driver compensation emerged as a top ten issue for the first time in the history of the ATRI survey, coming in at number three. This is most likely due to the need to significantly increase driver pay to attract drivers in response to the driver shortage.

While the pay has increased, there is still concern that it has not kept pace with inflation and that drivers are not compensated enough for non-driving activities such as detention.

Analyze driver compensation when compared with other competing employment sectors. Trucking fleets compete with other industries when they are trying to attract qualified drivers. However, other industries may offer similar or better pay but with the added opportunity of being home every night. This research would highlight the differences between the competing industries.

Driver detention has been a growing issue that has a direct impact on many other issues such as HOS and driver compensation. ATRI recently conducted a study in which they found a “27.4 percent increase in delays of six or more hours between 2014 and 2018.”

Research the safety and economic impacts of customer detention on truck drivers and trucking operations. The U.S. Department of Transportation Office of Inspector General conducted an audit of the impact detention time has on the industry’s safety and productivity and found that it “costs truck drivers and motor carriers over $1 billion annually and may be associated with increased crash risk. One of the first steps in solving the detention issue is to expand on studies like these in order to get a better understanding of the negative impacts detention has on drivers and motor carriers.

There is a major shortage of available truck parking which often forces drivers to drive beyond their allowable HOS rules or park in undesignated locations. Having ample safe, designated parking available is critical to allow drivers to stay within the current regulations and allow them to properly rest.

Looking to lessen the impact of these issues on your operation? Vertrax offers bulk commodity trucking software solutions, mobile logistics solutions for the last mile, and sonar-based bulk tank monitoring solutions that connect the oil and gas supply chain.